Perrysburg Alliance Church began as an extension ministry of Westgate Chapel (Toledo, Ohio) of the Christian and Missionary Alliance.

Under the leadership of Rev. William J. Carey and the Extension Committee of Westgate Chapel, plans were implemented for this new ministry on April 20, 1976. A steering committee was formed from members of Westgate Chapel and potential members of Perrysburg Alliance Church. 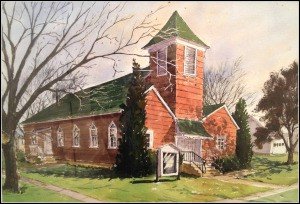 After much prayer and the evidence of God's hand upon this endeavor, the first services were held on June 6, 1976, at the Pine Street Elementary School (now known as Frank Elementary) in Perrysburg. Sunday morning worship service was at 9:30 AM, Sunday School at 10:30 AM, evening worship at 6:00 PM, and youth fellowship and adult choir practice at 7:00 PM. Wednesday evening Bible study and prayer was held at 7:00 PM. Rev. Carey served as interim pastor, in addition to his pastoral duties at Westgate Chapel.

In July of 1976, a meeting for consideration to become an organized Alliance church was held on a Wednesday evening at Pine Street School. The opportunity for charter membership was given, and on September 15, 1976, seventy-four persons became charter members of Perrysburg Alliance Church.

The opportunity to purchase a small church building was presented in the late fall of 1976. It was determined that if there was to be increased growth, there would be the necessity of a permanent church facility. The church building at 728 Mulberry Street proved to be the provision of God. Since room in the church was limited, it was also necessary to rent the house next to the church for Sunday School and youth meetings. 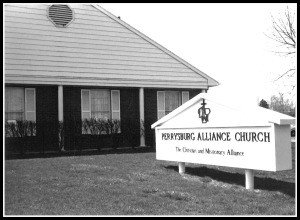 The Lord continued to bless this young church, and in January, 1977, they began to seek a full time pastor. In March of 1977, Rev. John E. Bock, was notified by the District Superintendent that the church extended a call to him to be pastor. Under the leading of the Lord, Pastor Bock accepted this call and began his ministry on April 1, 1977.

A sign raising, indicating the future site of Perrysburg Alliance Church, was held on the newly acquired property, on Sunday, July 17, 1977. An official ground breaking ceremony was held on the second birthday of the church, June 4, 1978. Construction was completed in May of 1979. With continued growth and to meet the needs of an ever-expanding congregation, a spacious multi-purpose building was built. It was dedicated, debt free, on Sunday, May 26, 1985. Further additions were built in 1998.

Pastor John E. Bock served as Senior Pastor until July 2001 when he was called to pastor a church in Amherst, NY. Reverend Thomas George (Pastor of Evangelism and Discipleship since September 1999) served as Lead Assistant Pastor in the interim during the pastoral search process.

In the beginning of 2002, the church governmental structure was reorganized to become a Governing board of Elders. Ministry councils took over planning and facilitating all areas of church ministry under the direct supervision of the Elders. This was a major shift from a separate Governing and Elder Board system in place since the establishment of this church body.

The second Senior Pastor of Perrysburg Alliance was called to this ministry after the Search Committee had completed its work in March of 2002. Rev. Thomas George was installed as the Senior Pastor on April 14, 2002, by District Superintendent Jeff Brown. During his ministry, a new sanctuary was constructed to accommodate a greater number of people.

Rev. Thomas George served as Senior Pastor until August of 2012. At that point, Pastor Thomas began serving as the District Superintendent of the Great Lakes District of the C&MA. Over the next 3+ years after his departure, two different Senior Pastors were called and served short tenures at PAC.

On October 4, 2015, Rev. Brian Elmer was installed as Senior Pastor by District Superintendent Rev. Thomas George. During Pastor Brian’s ministry, a maintenance renovation of the church facility occurred. This involved decorative changes to the sanctuary and lobby, painting, and flooring upgrades throughout the facility. There was also a change in the adult discipleship ministry from a Sunday School class format to home Growth Group Bible studies. These changes were well received and began with eight home groups.